On November 24, 2016, a delegation organized by the Department of Commerce, Jiang Su Province, China, visited the Wellington region of New Zealand. The delegation consisted mainly of Directors from the Economic Development Zone of Jiang Su.

Over the course of the visit, comprehensive discussions on a range of topics were held. 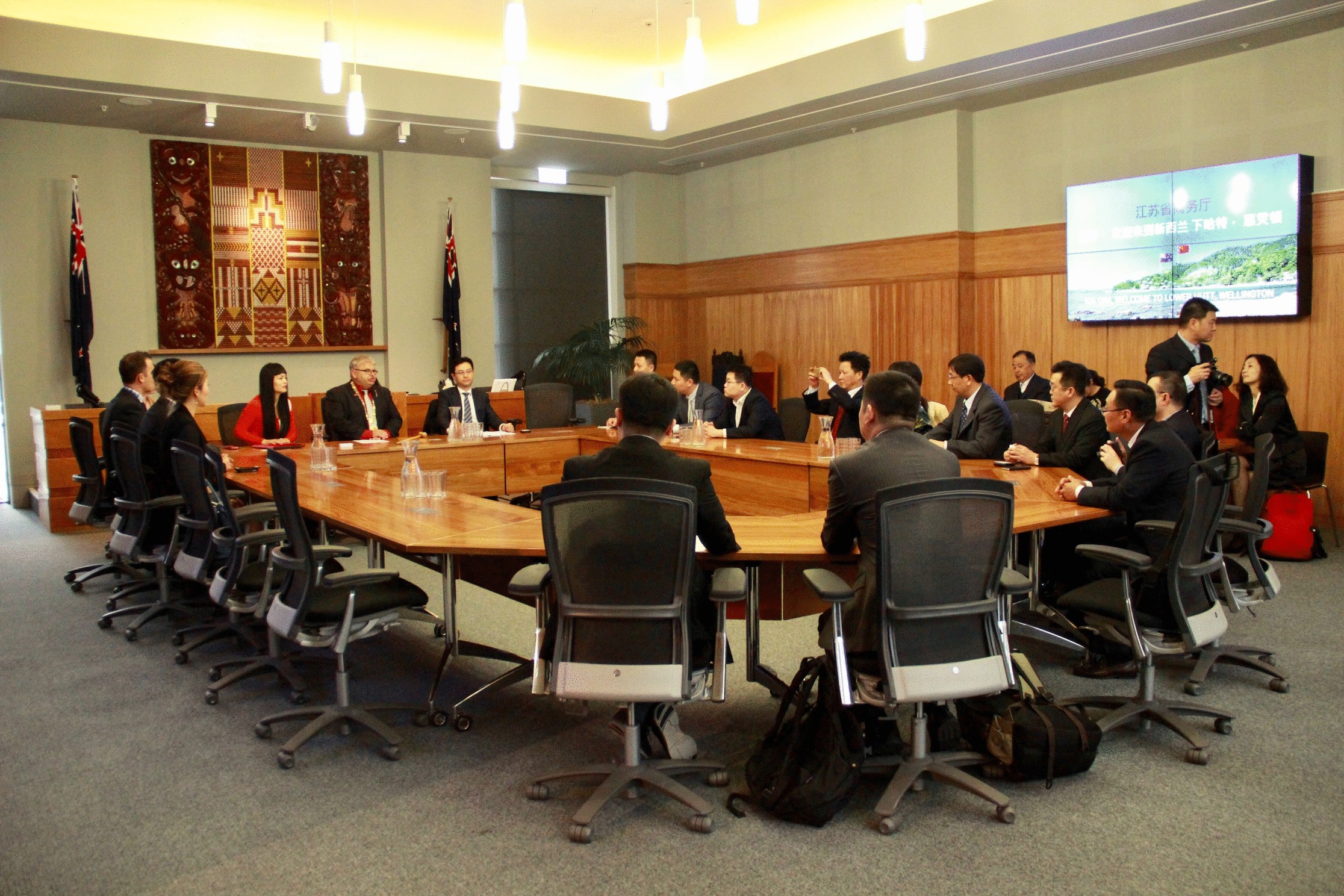 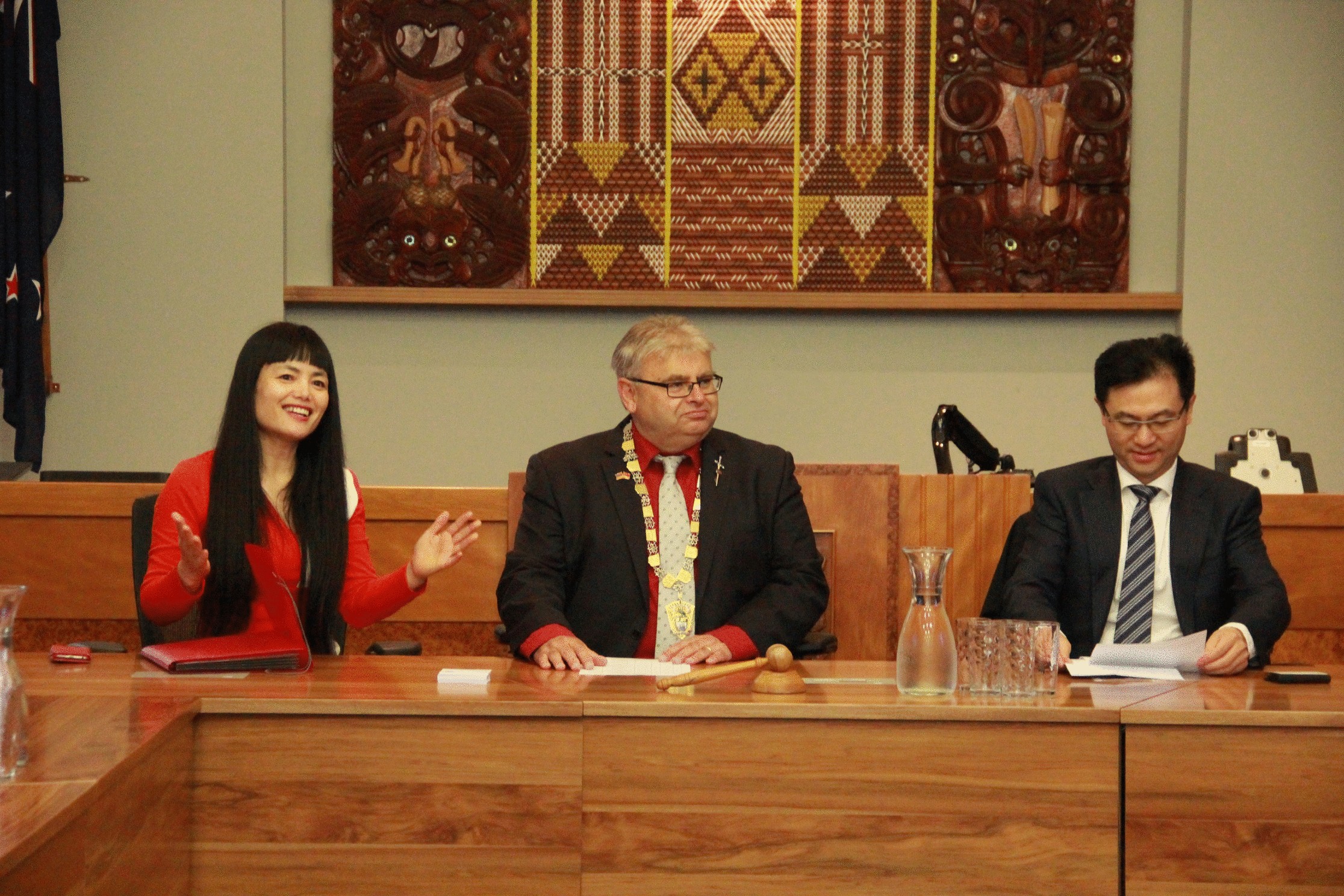 Ray Wallace gave a brief introduction to Lower Hutt before discussing the city’s economic model during the 1980s. With the decline of industry and manufacturing in the region (e.g. car manufacturing was no longer the viable industry it had once been), Ray explained how there was no choice but to focus on a new model for economic development. They simply had to rejuvenate Lower Hutt. Another issue was that the industrial legacy had left behind heavy pollution in some areas. 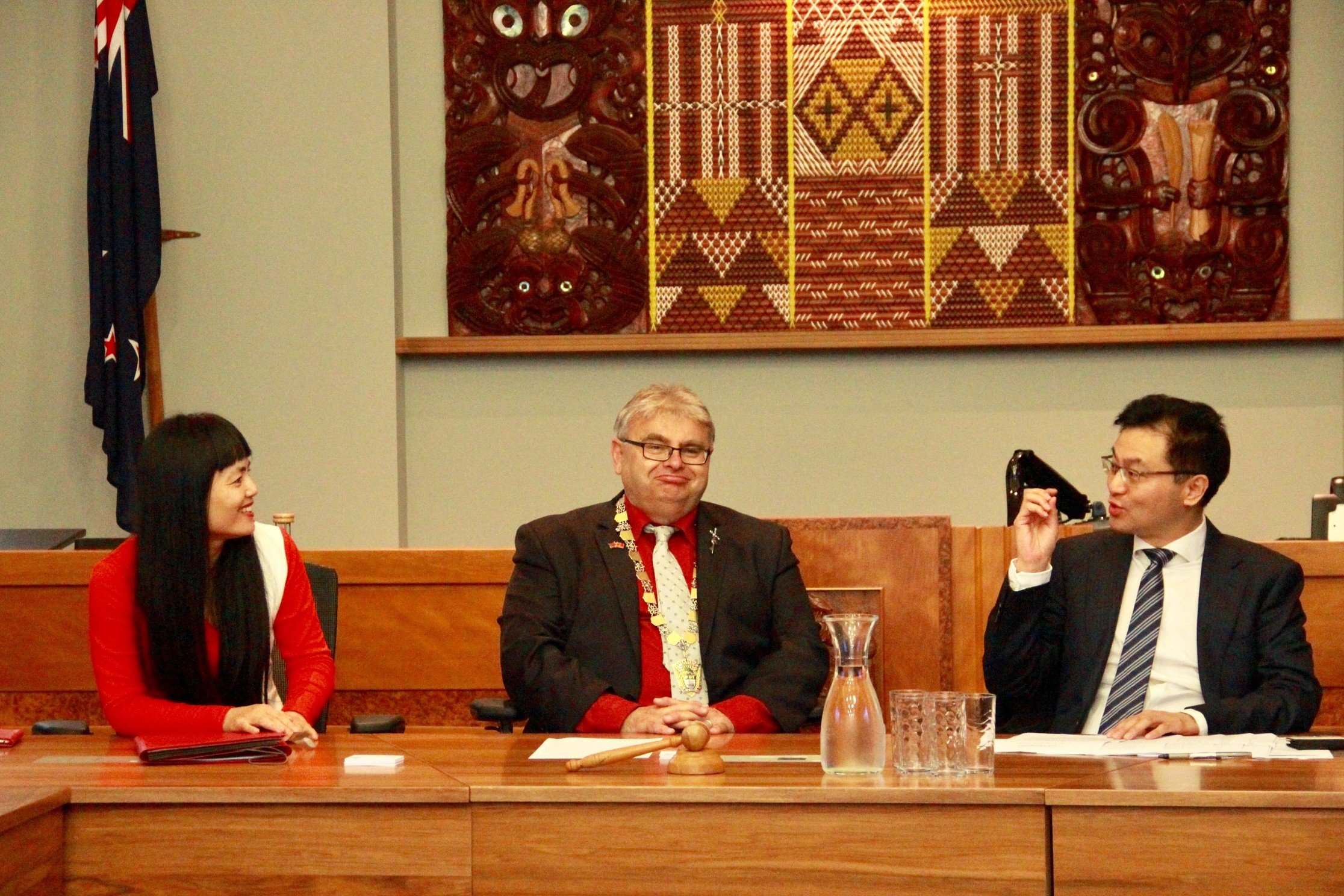 On behalf of the team from China, Cui Jian, the Director of the Department of Commerce then talked about the major impact the Economic Development Zone had had on the local economy. The local government has put a lot of effort into supporting this new zone. They are very confident that it will continue to grow and boost the region’s economy still further.

Sustainability was a key topic for discussion between both groups – particularly how to develop economically without having an adverse impact on the environment. Opinions and future strategies were shared and both sides expressed a wish to collaborate more on this area moving forward. Haiying Shi, the Founder of Sea Eagle Consulting was the interpreter for all discussions.

The meeting was followed by a trip to Day’s Bay.

The journey was an opportunity for the visitors to interact and ask questions. For example, they were interested to hear how the local council collected land tax, and how this is spent on the local infrastructure. 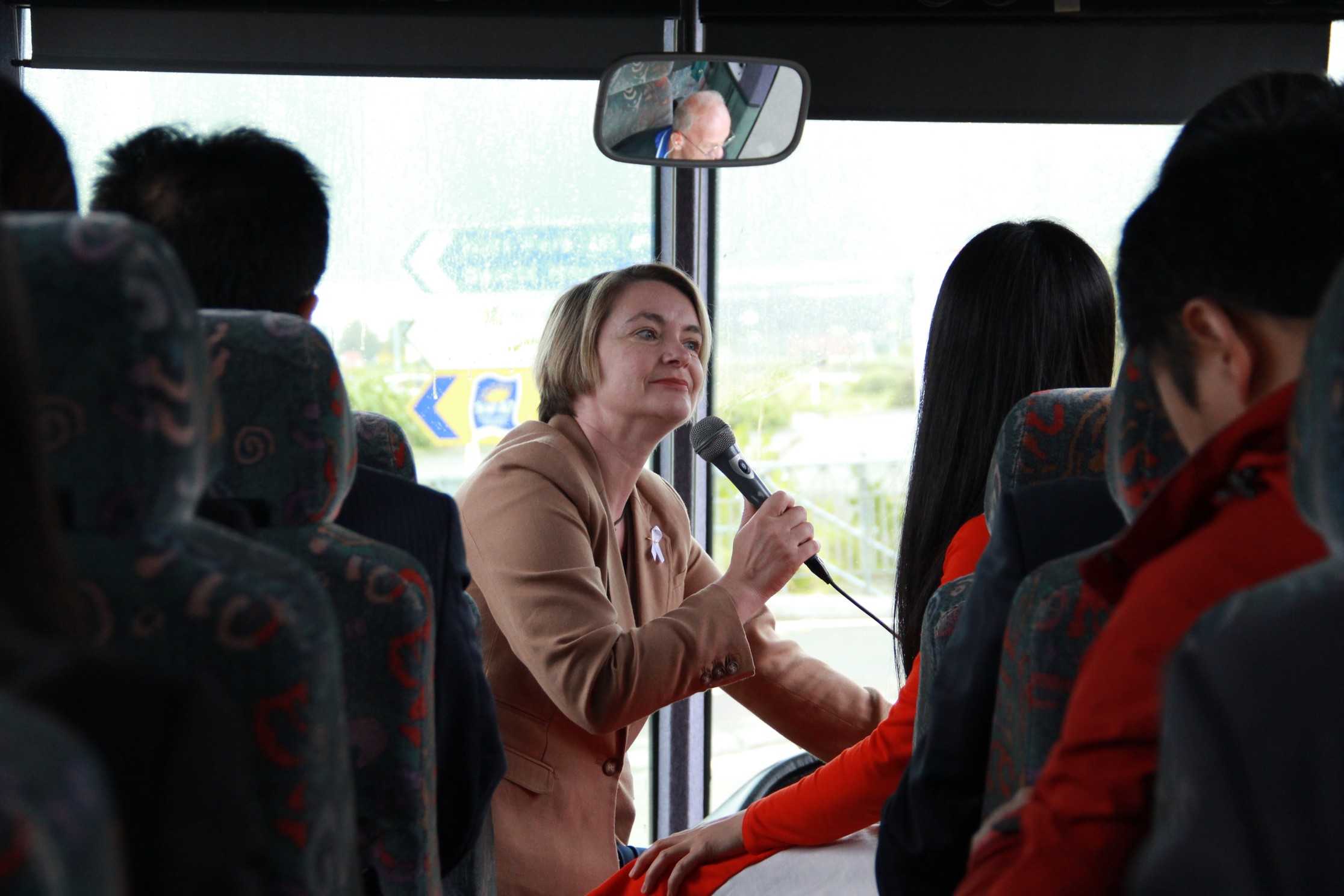 Lisa Bridson answered these questions and explained how the council must consult their residents on proposed infrastructure and development plans, and if there are objections, then plans are reconsidered. 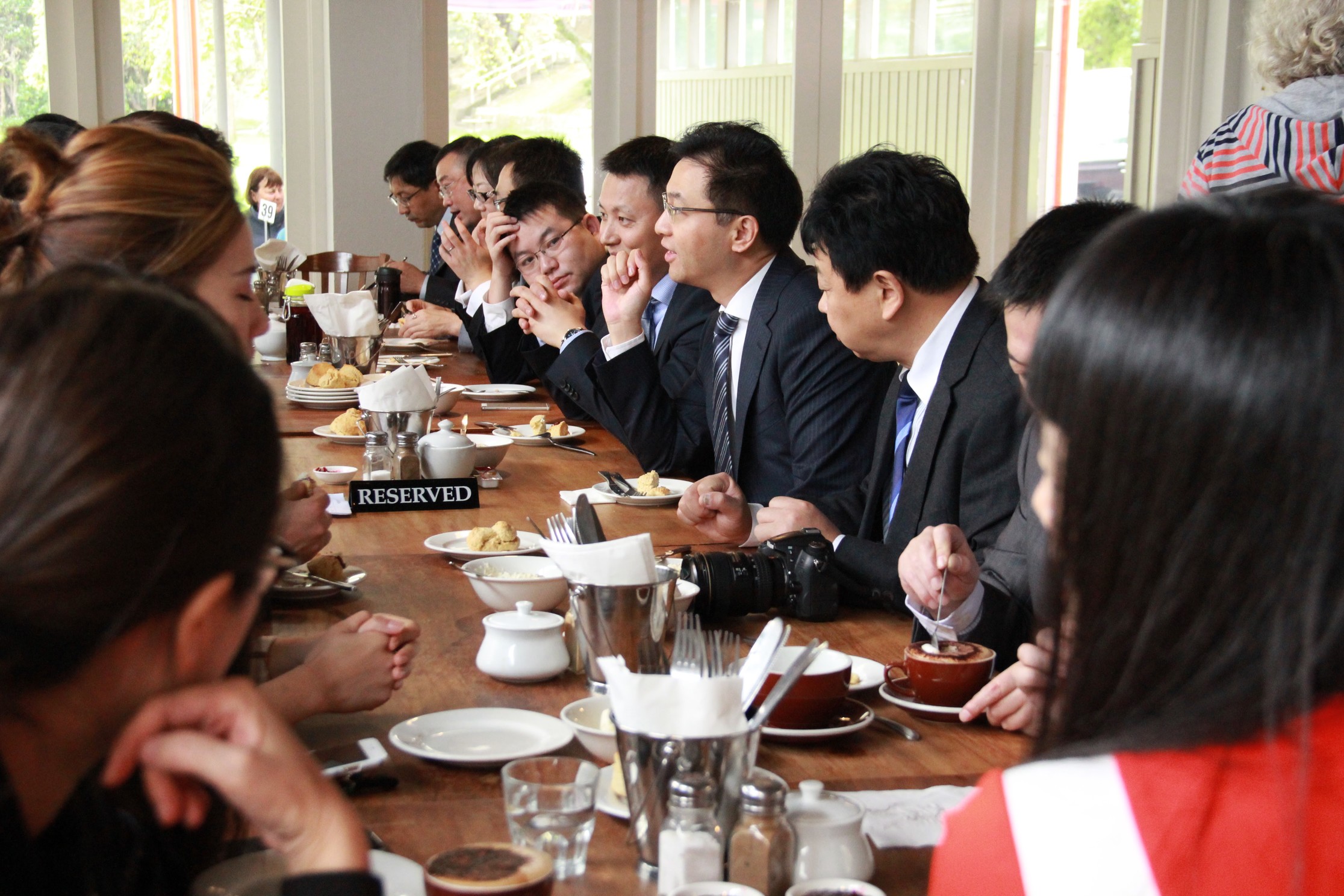 Lower Hutt City Council invited their Chinese counterparts to join them for a taste of the local coffee and a scone. As they saw for themselves the nature and the houses of Day’s Bay, situated between the bush and the harbor, they got a real taste of the Kiwi lifestyle.

A highlight for the visitors was a trip to a local Marae. Here they had the opportunity to experience firsthand the Maori culture, an integral and respected part of Kiwi life.

The first topic discussed at the second meeting was the urban development strategy for Lower Hutt. Haiying Shi supported this as the interpreter. 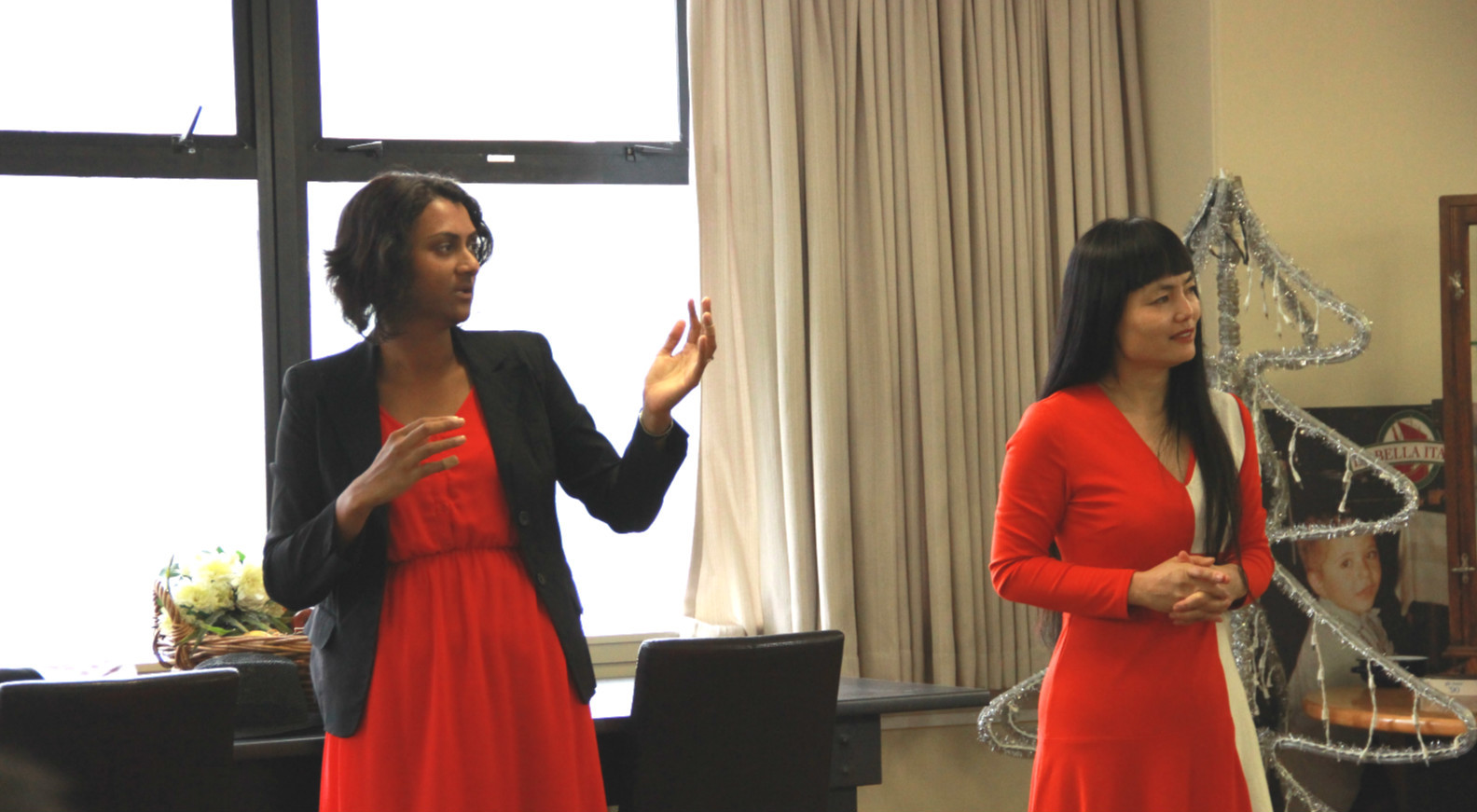 Parvati Rotherham, Project Manager for the council, presented on the vision for Lower Hutt and how the city will look in another 15 years, compared to now. It is hoped that more young families will be attracted to the area, and there are hopes to build another 6000 houses in 15 yrs, at a better standard than many of the existing homes. 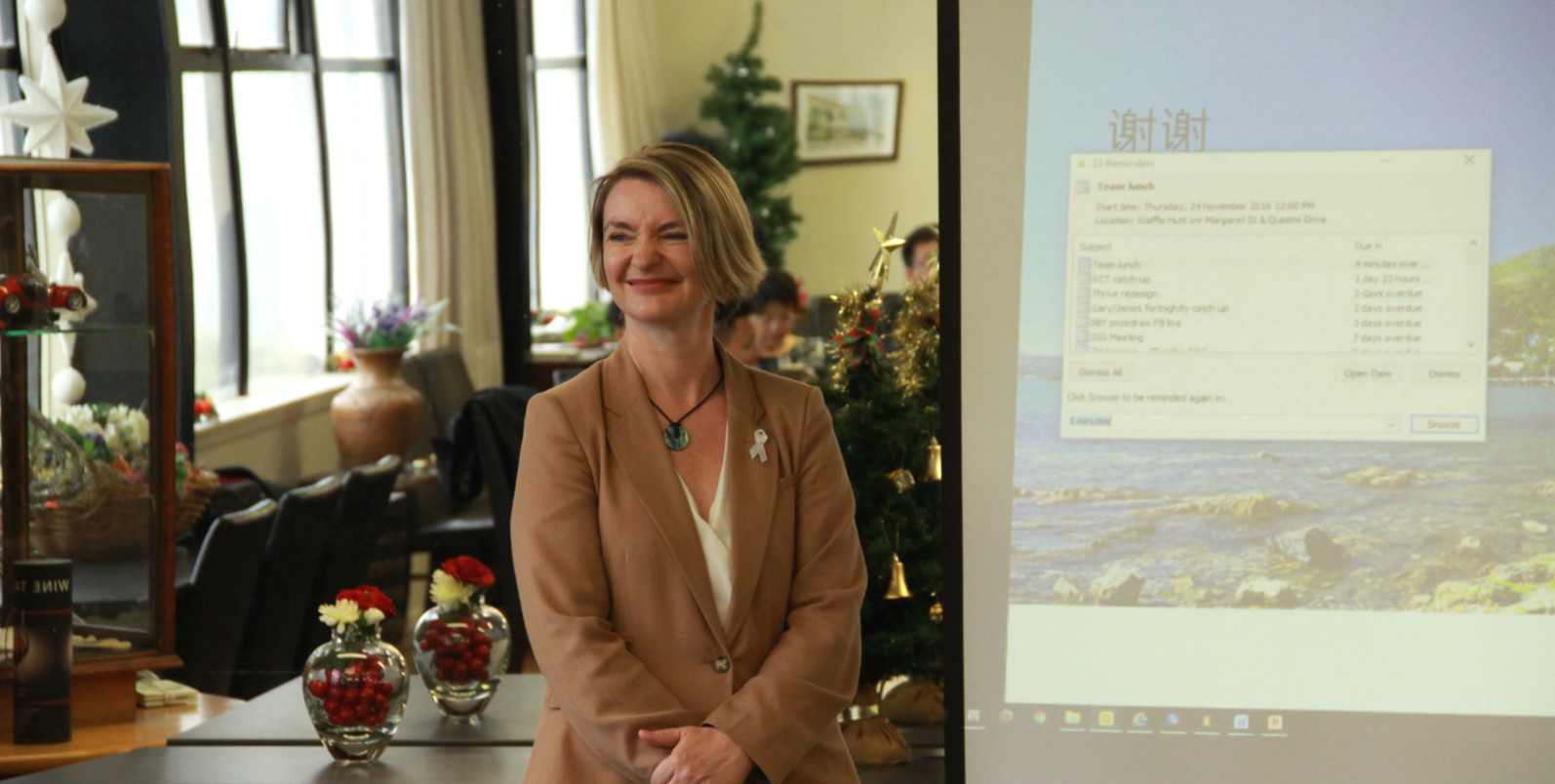 Lisa Bridson then talked about the regulations that have to be followed by those looking to build houses in the local area, and how the council manages this process. She also told how the council has worked to clean up the polluted Waiwhetu stream.

Once again, there was lots of interaction between the speakers and the delegates.

On the way, in the bus, the hosts showed off the local streets and typical Lower Hutt houses. This helps the visitors to better understand the current condition and future planning better. They also saw the previously polluted Waiwhetu stream and were delighted to see how swans have now returned to the water. 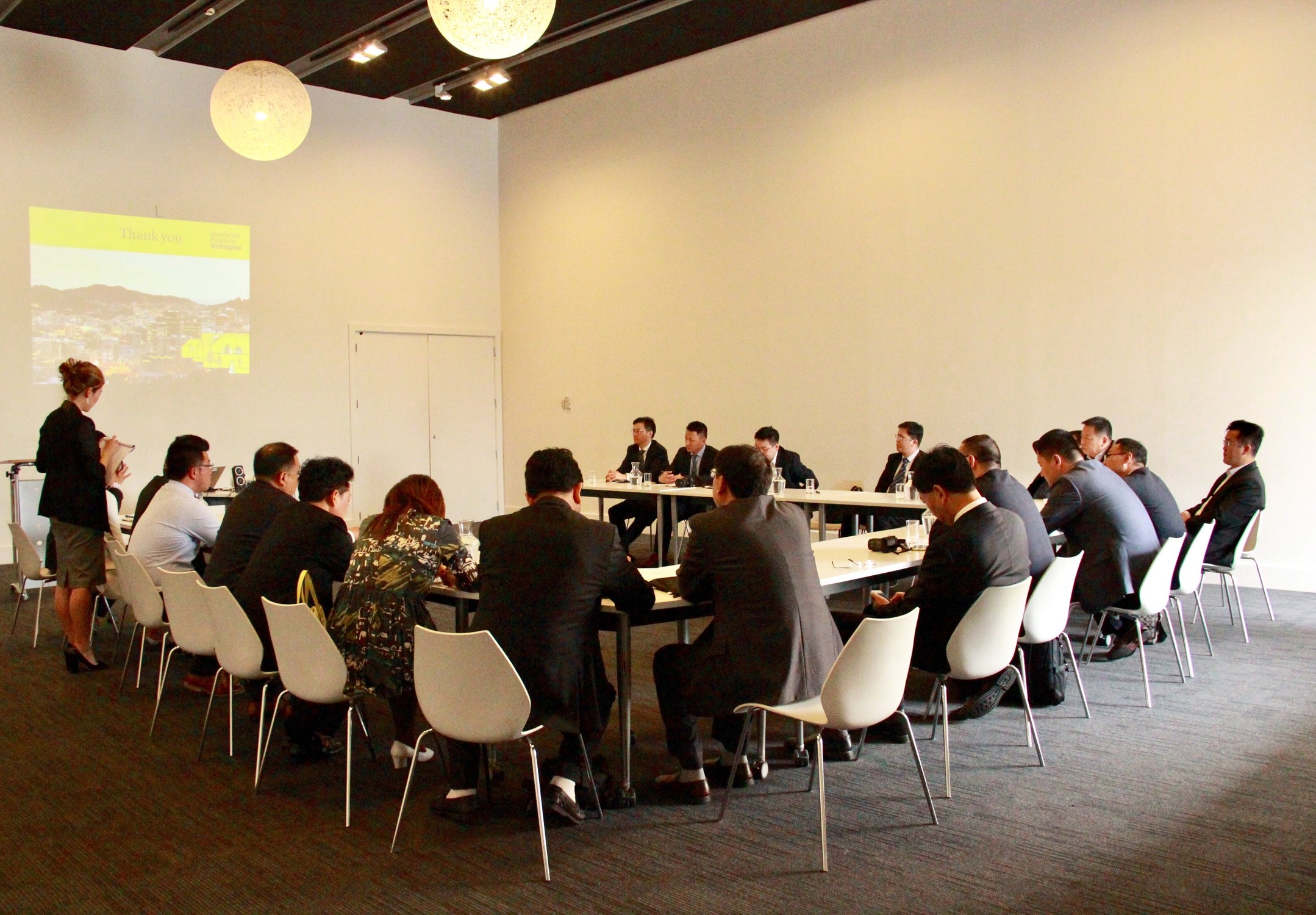 The third meeting focussed on Wellington’s global strategy, looking at how Wellington plans to become an increasingly global city. It was chaired by Tom Yuan with support from Amanda Cundy, also of Wellington City Council. Haiying Shi facilitated discussions as the interpreter. 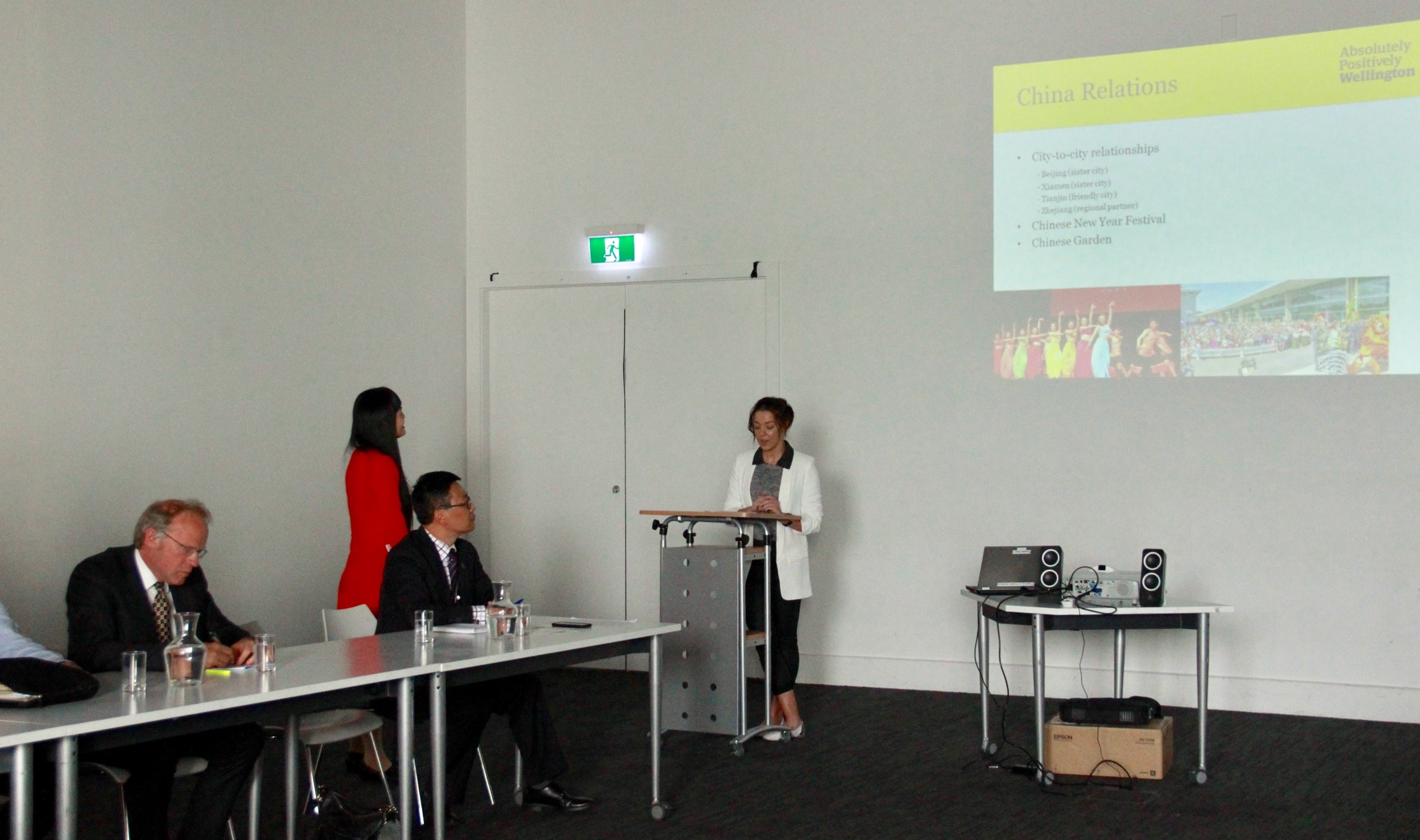 The Director of the Department of Commerce from the Chinese team expressed his surprise at just how global Wellington is. He also gave an overview of how Jiang Su Province has developed their international relations, including by establishing numerous sister city arrangements. 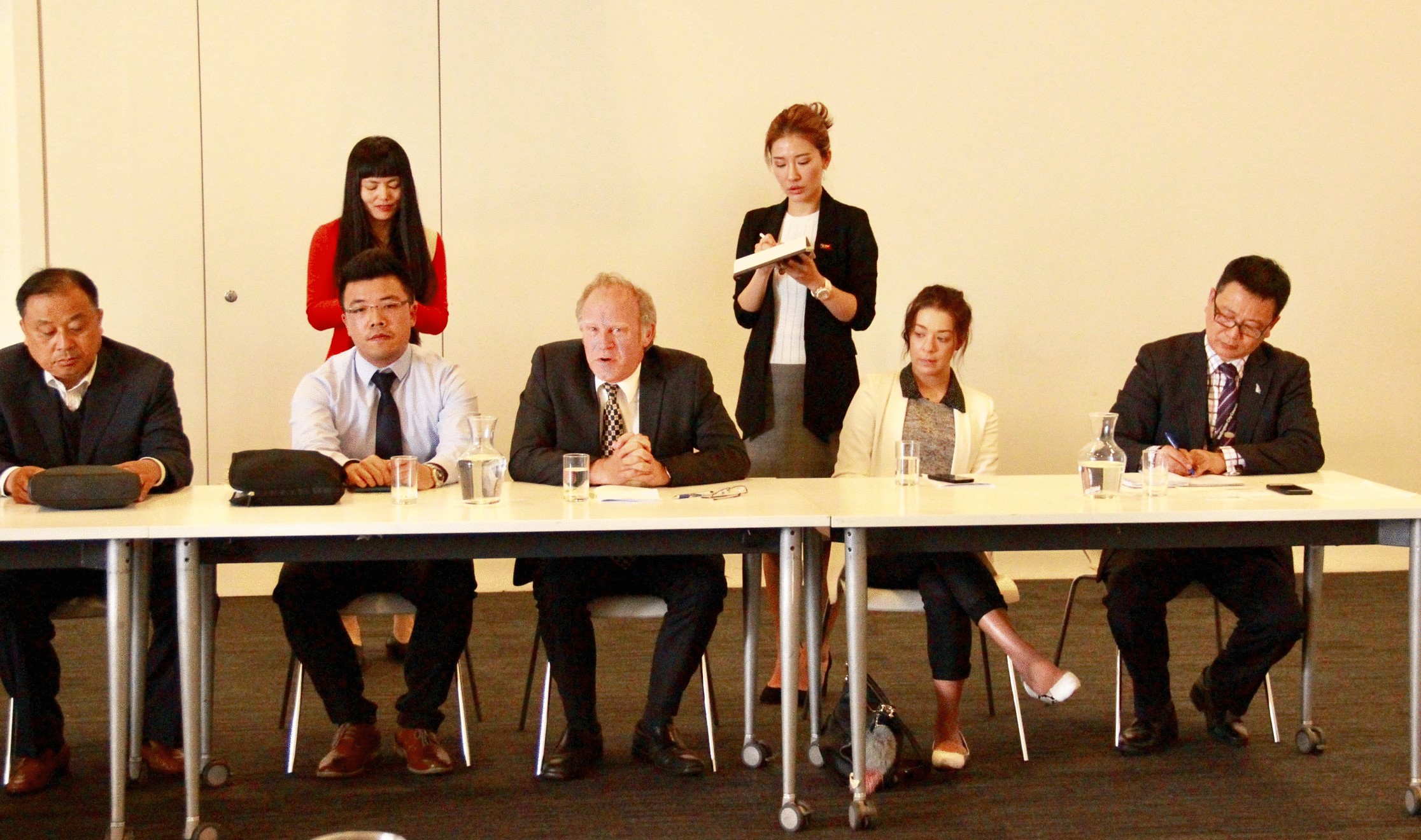 Jeremy Harding, GM of Development and Foresight for WREDA then spoke about the future economic development plans for Wellington. Both groups showed they were keen to collaborate on future opportunities for development, considering how Jiang Su Province and Wellington could work together for mutual benefit.

The participants found the visit and the meetings very inspiring, and very beneficial, particularly sharing thoughts on balancing economic development and environmental sustainability. It was agreed that local governments need to collaborate, and support each other to find solutions. It is important to keep a continuing focus on this key subject. The visitors could see that their New Zealand counterparts have done a great job of protecting the environment as they have developed. Jiang Su Province can hopefully learn or be inspired by how they have managed this.

Both sides also highlighted that this visit was just the beginning for future collaboration on a broad range of economic, environmental, cultural opportunities. 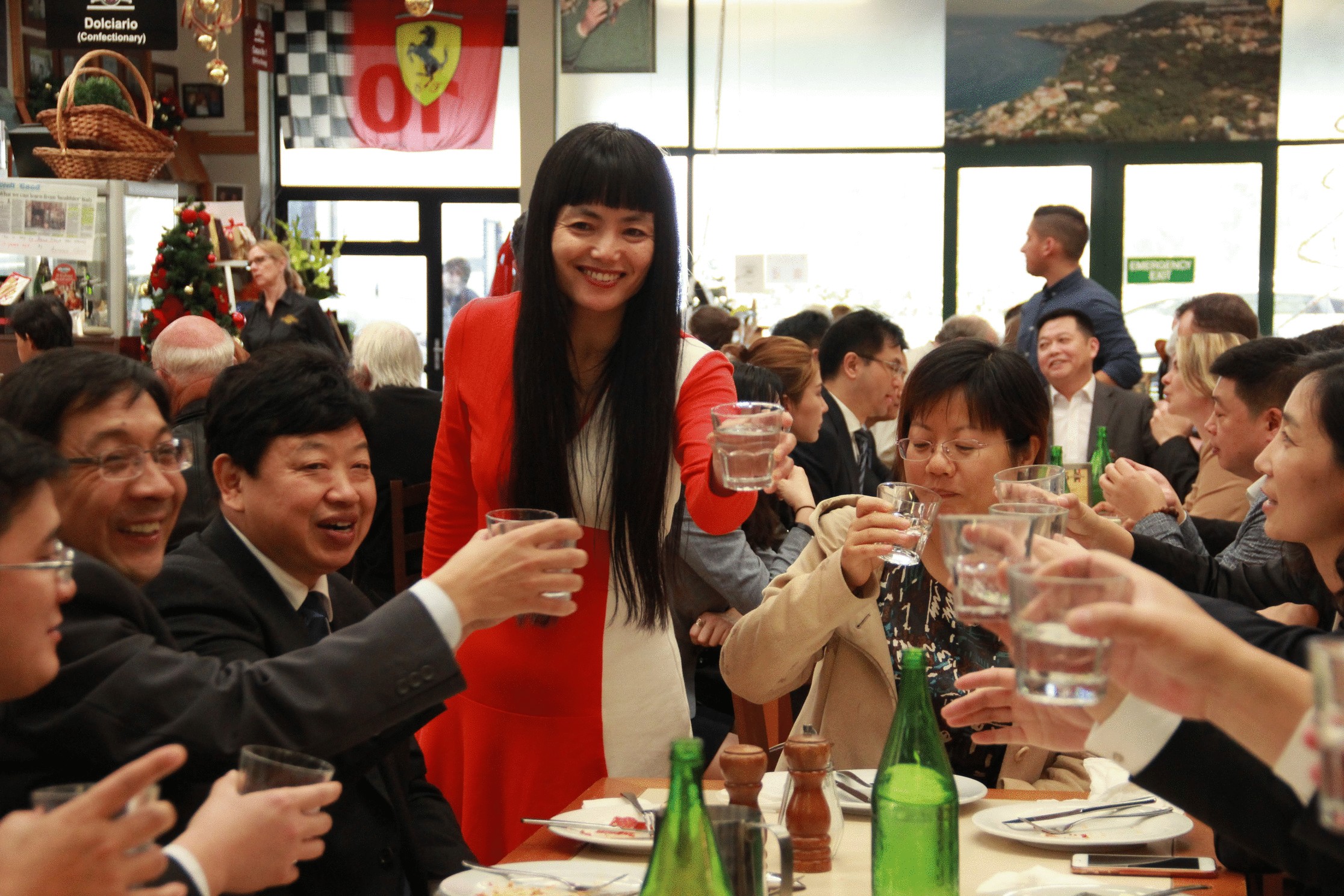 Sea Eagle Consulting received good feedback on our support, and we are looking forward to helping both groups as they seek to collaborate more in the future.